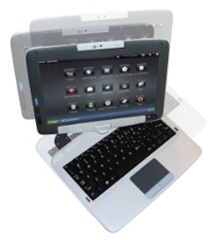 M&A makes a mini tablet PC (also called a netbook) called the Companion Touch. It’s been found to come with malware pre-installed. If you’ve bought this model after February 2009 you should scan it for viruses. You should also scan any devices you might have plugged into it, such as flash drives or other removable drives.

The malware found on this device is designed to steal passwords. More detailed info here.

It’s unfortunate that these days many devices have been shipped from the factory with viruses and other malware, such as digital photo frames and MP3 players.