AV-Test is an organisation that interdependently tests antivirus software. Some of this year’s results are shown below, you can go through all of the results on their website. The list is large and worth looking through.

Here are the top antivirus programs according to their tests – for Windows 8.1. I’ve only copied the ones that received a top score in detecting malware (protection level). They also measured things like performance and usability but I won’t focus on that.

Facebook are stepping things up a notch and getting tough on malware, in a good way. Their latest initiative can detect malware on your computer. If anything suspicious is found, your Facebook account is temporarily locked (to prevent the malware sending spam using your account), and you’ll be asked to download an anti-virus program called McAfee Scan & Repair. There’s also an option to use Microsoft Security Essentials (MSE).

This new procedure can also be invoked manually, if you suspect your computer might be infected. The link is http://on.fb.me/infectedMSE, and you’ll need to enter your password. Note: when entering passwords, always look at the address bar at the top of your browser and make sure it’s genuine – in this case, it needs to have facebook.com/ in the address.

If your account is temporarily locked because malware was detected or because you manually started the procedure, you won’t be able to unlock the account until you finish the virus scan.

This is all for Windows. OS X users will have a slightly different procedure.

There are more details on Facebook’s web site.

Google has added a new feature to its search engine – it can now detect if your PC is infected with malware. It’s a clever bit of code that just quietly watches for unusual activity.

At the moment it only detects one strain of malware, but since it’s transparent and non intrusive it’s a good thing. Also, this is only relevant to Windows.

So if you see this message, your PC is probably infected with malware. Google suggests some steps to remove it, and you should really buy and install an antivirus program to prevent further problems.

A French security company called Intego has released the first antivirus app for iPhones, called VirusBarrier. This is news because so far iPhones have not needed antivirus programs, there are currently no viruses on iPhones. Here’s a breakdown of what VirusBarrier is:

What VirusBarrier does not do:

So overall it seems more of a publicity stunt, it’s not something I’d spend $2.99 on.

Here’s something that happens every day, a message appears in your web browser telling you a virus was found and to click OK to do a scan. To get straight to the point, this is a fake antivirus program designed to trick you into installing real malware.

If you see this on your browser, close the browser. Don’t click on any buttons. And most importantly, don’t panic. These scams are designed to scare you into making irrational decisions. 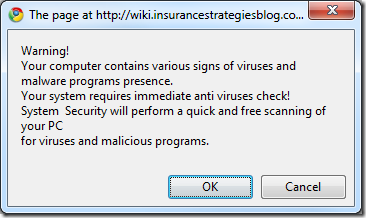 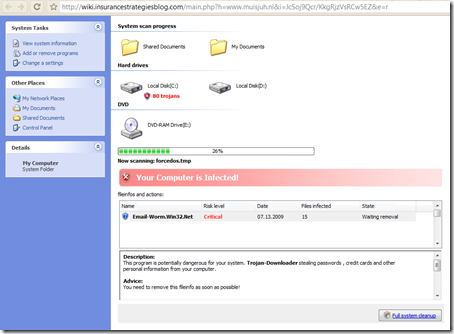 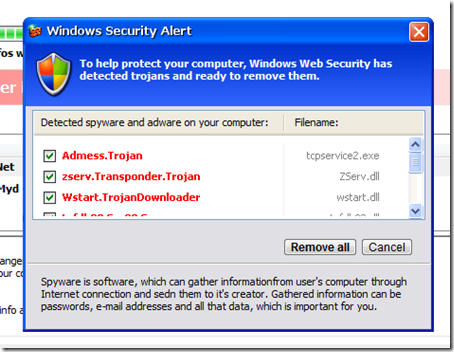 This type of scam happens on both Windows and Mac computers.

McAfee Stinger is a program to clean malware from PCs. It detects and removes more than 1300 types of malware – that’s pretty useful.

It’s not a replacement for a good antivirus product, but if it’s too late and your PC has been infected then this could help clean it.

Here’s a combined hoax and malware. Let’s start from the beginning.

People have been posting notes on Facebook about something called “un named app”. It tells you to remove something from Facebook. It’s a hoax. Don’t believe what it says, don’t follow the instructions, and don’t pass it on.

Below are some quotes of the hoax:

ALERT >>>>> Has your facebook been running slow lately? Go to “Settings” and select “application settings”, change the dropdown box to “added to profile”. If you see one in there called “un named app” delete it… It’s an internal spybot. Pass it on

this is real.. i checked and found this app and deleted it… hopefully, my facebook will run better now.

Cannot believe how much quicker mine is running after doing this….

I don’t have this app on my Facebook account but if you do, don’t worry. It’s a normal part of Facebook and you shouldn’t delete it.

Now the second part of this hoax is a real trojan. If you go to Google and search for “facebook unnamed app” you’ll see quite a few results. Some of these results are fake antivirus programs.

A fake antivirus program is actually a trojan. It pretends to scan your PC and quietly installs malware in the background. It goes under the name of Security Tool, it has a fancy detection screen and everything. But it’s definitely bad.

The rule of thumb is that if a web page tells you that your PC might be infected, don’t trust it. Go and get your own antivirus program, not something that pops up on your screen (see here for a good free antivirus program).

There’s a lot to learn here. Basically, be careful who you trust. These days scammers have to trick you into installing malware and they’re good at it (it’s called social engineering).

Avast 5 is the latest version of a great (and free) antivirus program. It’s designed for Windows PCs and does a pretty good job. And did I mention it’s free? There’s no excuse not to have an antivirus program installed on any computer.

The free version can be downloaded from here.

A personal firewall is a program you install on your computer. It stops unknown programs talking to the internet. Why is this important?

Just say some malware gets installed on your computer. It wasn’t picked up by your antivirus program for whatever reason (maybe you don’t even have antivirus). It starts watching you type in your passwords and tries to send details to a criminal’s server. This actually happens every day to some people.

A personal firewall would detect that an unknown program is trying to send information to the internet and bring it to your attention. It blocks the program and asks you if you want to allow it to proceed.

It’s different to a normal firewall because it runs on your PC instead of on the network. And it doesn’t just keep people from hacking into your computer, it stops malware connecting out to the internet. So overall it’s a good thing to have, it’s just a bit more defence against online fraud.

Below are some new deals I’ve come across. I haven’t tried these programs and can’t comment on how well they work – I suggest you ask around.

ZoneAlarm Pro – this program has been around for many years. The Pro version, which usually costs USD39.95, will be free for today only (13th of October 2009). Go to their web site here.

Online Armor Premium – I haven’t heard of this product before but it’s legitimate. It usually costs $39.95 but it’s free to PayPal members, until the 19th of October 2009. Click here, then on the button to buy now, then proceed to pay with PayPal, it will be discounted to $0.

Windows also has a firewall built in but in my opinion it isn’t very good and it’s difficult to configure. And most antivirus packages, the kind that cost money, include a personal firewall.