Some emails have been seen with headlines such as:

The email looks like it has a link to a video. 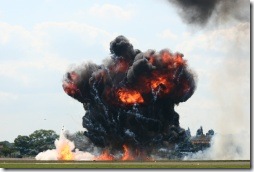 In the background it installs a variant of the Storm trojan, probably the most widely spread and malicious trojan to date. Your PC will then be under the control of others without your knowledge. It’s bad. Estimates vary but there are between 1 million and 10 million PCs in the world that are currently under the control of Storm.

So don’t open this email. At this time Iran has not been invaded (and hopefully no country ever will be). Delete it, and let others know.