There’s a website published by someone called Jason Tan, in Malaysia. On his website Jason claims to be earning incredible amounts of money with almost no work. After a lengthy sales spiel there’s an offer to buy his e-book for RM90 so that you too can make this much money.

So, is this real and is it worth spending the RM90 he asks for? Yes and no.

Based on comments and blogs from other websites on the internet it seems Jason earns his money from selling this e-book. It’s highly unlikely the house and Mercedes on his web site are actually his.

So what’s in the book? Some people have bought it and written their thoughts on it. Jason’s e-book basically tells readers that they should write an e-book and sell it online to make money just like he does. That’s it, that’s his big secret. This method doesn’t scale very well,

The other idea that Jason sells to people is an affiliate system. Anyone who wants to make a small amount of money with very little effort is encouraged to help Jason sell his e-book and earn commission. Unfortunately people have been spamming web sites and mailing lists in order to get their commission. Again this money making scheme that doesn’t scale very well. 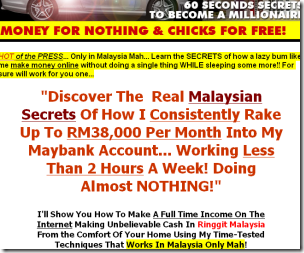 Another site that looks almost identical to his is Ewan Chia’s money making scheme. Once you start to see a pattern of these websites appearing it’s obvious that it’s a bit of a scam. Ewan’s site is here, http://autopilotprofits.com/

And James Ng created a site that’s also almost identical to the above two, http://www.besuccessonline.com/

Are you starting to see the pattern?

Save yourself the RM90 (or any other amount these people charge). Instead spend it on some business books at your local bookstore. You’ll get much better value.

Reference: This page has a long discussion thread about Jason Tan’s scheme with a detailed description of what his e-book contains.

One thought on “Only In Malaysia Mah”