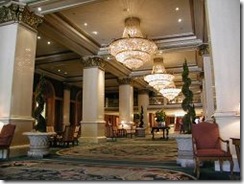 If you use public computers in hotels and similar environments (e.g. internet cafes) you need to keep in mind that the computer could be capturing your passwords. You can’t just assume it’s a safe computer.

This week a man was sentenced for installing key-logging programs on hotel computers in Miami, Las Vegas, and other US cities. Customers used these computers and whenever they entered a credit card number, the number was captured and used to buy over US$400,000 worth of products and services.

This isn’t a once off incident. If the computer isn’t yours then you just have to assume someone can capture your passwords or credit card numbers. If you need to use these computers to log into a corporate network or some other secure service (such as online banking) then think twice. Is it really that important? If so, then change the password as soon as you get onto a different computer.